Hey you nutty bike lovers, welcome back. Thanks for stopping by for a read. It is always appreciated. Seriously, high five!

Some of you may or may not remember, but a few years ago I wrote a piece about wanting to change the way I rode my bikes? I wanted to slow down and be “in” the ride and not just “on” the ride.

I unclipped and rode flat pedals for the first time in over 20 years.

I was even riding in sandals for Pete’s sake. Come on….do you remember that? Jesus!

I was also steering clear of lycra while riding in plain clothes….and sometimes in a straw, wide brimmed hat and no helmet. Well, anything?

Look below! Now do you remember?

Really, nothing? Oh come on!

Anywho, it was nice, it was a different side of the coin…and I now see the appeal of riding that way, I do. But something was missing. I longed to ride with my friends more. I mean, I ride with my friends the same amount as I always have. No one was not riding with me. Quite the contrary, they were really trying to understand and embrace what I was trying to do…like the great friends they are.

I guess what I mean when I say that I “longed to ride with my friends more” is that, while on the actual ride with my friends, I want to ride “like” them more. That is to say to ride like I used to. Meaning, that I felt that I was a little out gunned. I mean I could keep up and stuff….and it wasn’t like we were racing each other, but I felt that I was ALWAYS on the wrong bike for the job. Which still isn’t exactly what I mean, but goddamnit, hopefully you get the point. I guess it was like, they hadn’t changed their gear. They only changed their riding style because they were riding with me…so it seemed. None of my friends were willing to invest in something that changed their current way of thinking or philosophy when it came to cycling. But believe it or not, I was still 83.5% sure they were eventually going to see the wonder that I had discovered and be more than willing to jump on board with me. But alas, they weren’t into it….they weren’t going to abandon their ways….and I never blamed them. I just continued on my own.

So, as you probably guessed….I seriously pondered this for much, much, much longer than any normal person would. That, I am 100% sure of. But, that’s just the way I do things. Sue me. I’m not really sorry about it. I liked it, it was something new and fresh for me. A whole new and different way for me to do something that I have been doing the same way for 30 years. Plus, it was super fun! The great thing is that I took some of that style and incorporated it into my old ways of doing shit. Now I feel I have a riding formula that is super bad ass.

So…back to what I was saying earlier about my old riding style/philosophy.
Along with the way I was riding my bike, I was also preachin’ about the caustic way that race culture in the bike industry can and will eventually discourage people to ride bikes more. I wrote that; “in order for us to change our mindset, and embrace a less car-centric infrastructure we need to start with the basics of viewing bicycles as the multi-faceted tools that they are.”

Well, that hasn’t changed, I still believe that.

OK, so onward and upward….

What has changed about the way I ride as of late is that I am clipping in again, gearing up a little more…nothing crazy. I am wearing lycra again when on my Haanjo. I have the chamois between my legs again on both bikes. So, that means I am off of the Brooks B17 saddle and back on the little saddles…they are easier to get off the back of on steep descents. I am charging sections again…picking up the pace a bit more. Again, nothing crazy.

I don’t know how to explain the change back to the way I used to ride…other than I liked it and I missed it and I’m glad I switched back. Like I said, I didn’t go back and adopt the exact way I used to ride. I took the things I liked about the more relaxed, unclipped way of riding and the performance forward riding I used to do and combined what I believe to be a perfectly sustainable, longterm riding style that compliments what I need out of my bicycles.

OK, so enough about that. Let’s talk about my new bike!

Over the past two years or so, I’ve been working with a great client. They’re a consumer-direct bicycle company out of Canada called RSD Bikes . 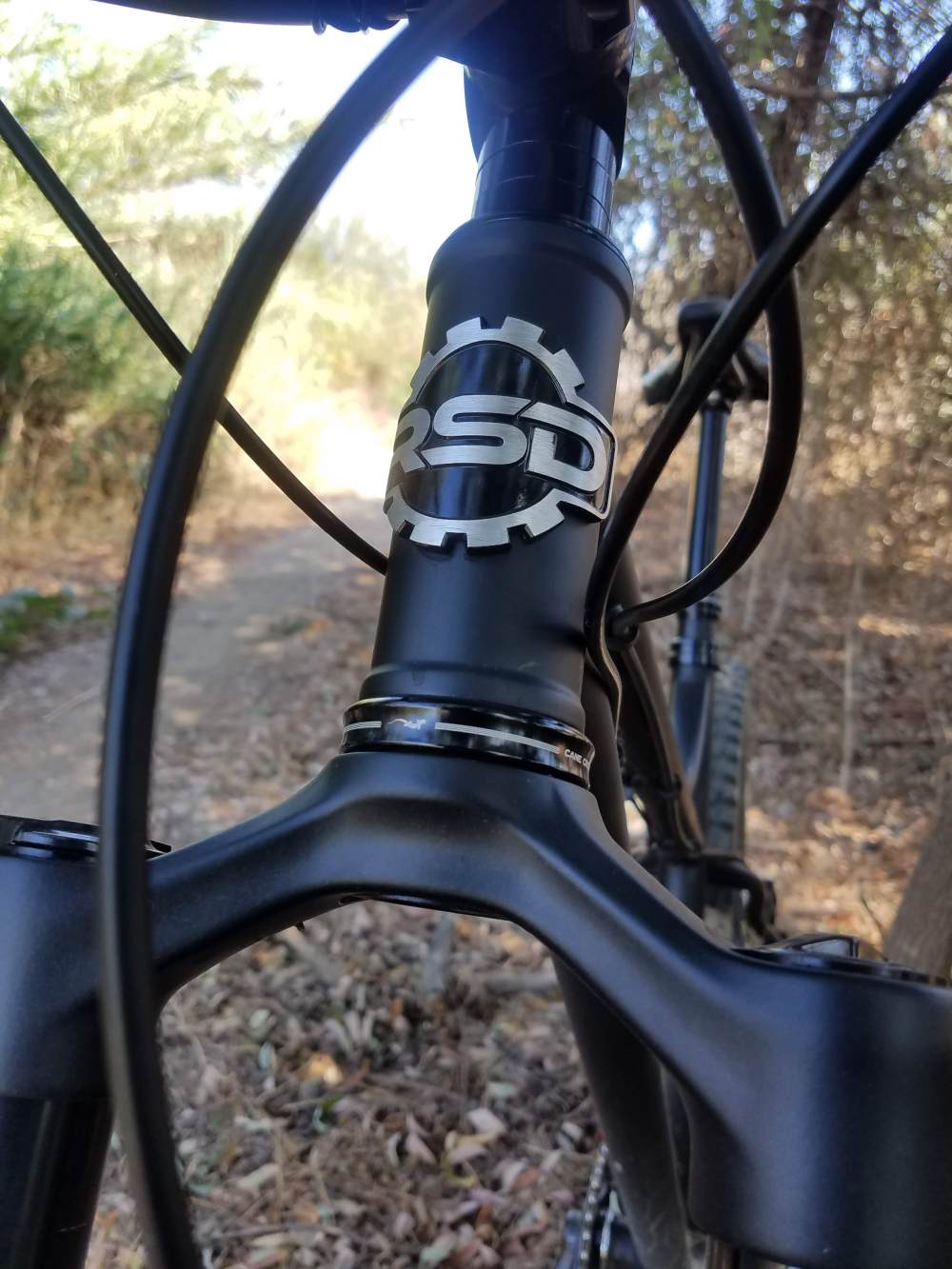 Cool company, great bikes and awesome people. Late in 2017 I caught wind that they were doing an aggressive hardtail. An all mountain kind of bike that will be crafted out of butted chromoly. That’s right, steel. I was stoked and intrigued to say the least. Not a lot of bike companies are offering something like this. So, yeah. I was excited to see it.

This last April, at Sea Otter Classic, Alex from RSD Bikes was roaming the show with two working prototype hardtails in two colors, a yellow version and a turquoise version. We stopped, chatted and caught up a bit and then started talking about the new model they were showing everyone. As I was gawking at the two prototypes, thinking to myself…”I want one of these, I just wish they made a black one.” Alex says, “it will come in these two colors and an all black model.” Than he said they will be calling this beast the “Middlechild”.….

Speaking of XT…the spec sheet is very impressive. Shimano XT 4 piston brakes with SLX Rotors (180mm front and rear 🤘🏻means stopping power for days) XT shifter and rear derailleur with a XT rear cassette (11×46). It has a Race Face bottom bracket and Race Face Turbine Cinch cranks with a Race Face 30t, wide/narrow chainring. It also boasts a full Race Face Turbine R cockpit. I chose to get the option of the dropper post which is a KS Lev Integra. I upgraded the dropper post remote before I even put the bike together. I had read that the stock KS remote lever left a lot to be desired. So I chose the Wolf Tooth ReMote, which is stellar and worth every dime not to mention it’s literally the only upgrade I have done to this bike!

It is a steel, hardtail…so you’re getting all of this amazing bike for a very, very reasonable retail price.

The attention to detail on this bike is fantastic, the aesthetics are perfect (matte black paint with subtle, under stated gloss black decals) right up my goddamn alley.

I put my old XTR pedals on it, added some Orange Seal Tire Sealant to the front and rear tires. They were all set up for tubeless from RSD…just had to break one side of the bead, take out the tubes add the valves and sealant and you were good to go. They set up in minutes…really easy.

So, how does it ride you ask?

Well, it’s a hardtail, so it climbs really well…’natch. It’s got a 64.5 degree head tube angle

so it descends like a bat outta hell. With that slack head tube angle and 74 degree seat tube angle, paired with the 140mm fork, makes this a fantastic “do everything” kinda bike. Perfect for someone like me that has whittled down his bike quiver (with the help of this beast) to a manageable amount of bikes. Basically the Haanjo EXP Carbon and the Middlechild. Seems like a pretty perfect scenario to me.

My Middlechild is a size large. I am 6’1″ and it fits me perfect. That size, bone stock weighs in (on my shitty scale) at 27.3 pounds. Not heavy for what it is, but still heavy by today’s standards. Not that I (or you for that matter) care about “todays standards”…plus, weight is not what this bike is about anywho.

This is a bad ass, stout, do anything, steel wonder rig that, because of the absence of any frame pivot points to maintain, is a hassle free descender that can keep up with the best of them…and turn right around and climb the bejesus out of a hill. And I am here to tell you, that it sure doesn’t ride like a 27 pound bike, it rides much lighter…even with the aggressive, Plus size tires, it rolls really well. The rear triangle is compliant and gives just enough to take a little edge off some of the rough stuff. So, yeah. I really dig, nay, love this bicycle….a lot.

I don’t really have much else to say other than what I always say:

“Ride what makes you happy.”

Buck the trends, unless that is what makes you happy. Don’t listen to the nay-sayers. Who cares what other cyclists think or say. Get out there and ride your bike as much as your schedule let’s you…and then squeeze in a little more.

Have fun…Oh, and visit RSD Bikes when you get a chance. Check ’em out and see what they are offering…I bet you won’t be sorry.

2 thoughts on “My Black Middlechild…”

I have a total and complete obsession with the bicycle and ALL of its culture. I am an unracer, and partake completely and wholeheartedly in the non-competitive side of cycling. View all posts by Ron Frazelle